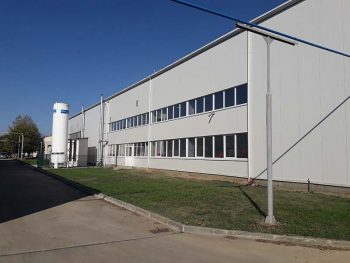 The Spring Factory was established in 1974 as a part of state owned plant “Friedrich Engels”, present “Arsenal” Jsc. in order to meet all needs of springs in the production of guns in Kazanlak.

Gradually the factory became the main supplier of springs for the whole Bulgarian industry.

The expansion of the nomenclature define the need of new high-productive spring coilers and benders from Western producers.

In 1983 started the manufacture of hot formed springs by a brand new Italian line.

In the period 1985-1986 was built a new workshop, equipped with Bihler automatic stamping and bending machines, quenching and coating lines for the production of links and belts.

In 1995 in the portfolio of the factory was added the steel magazine for AK 47 and started its serial production.

In 1997 started the production of Barbed razor wire.

In 1999 the factory became private with company name “Spring Factory Co.” The former products and activities were developed and the nomenclature was increased by new links and steel magazines for the light-weight guns.

The new owners of the company invest in new machines and equipment, as well as in quality, working conditions and personnel’s qualification. The production capacity was doubled.

Nowadays Spring Factory Co. is the only Bulgarian producer of hot formed springs, steel magazines for light-weight guns and links and belts for heavy-weight guns.